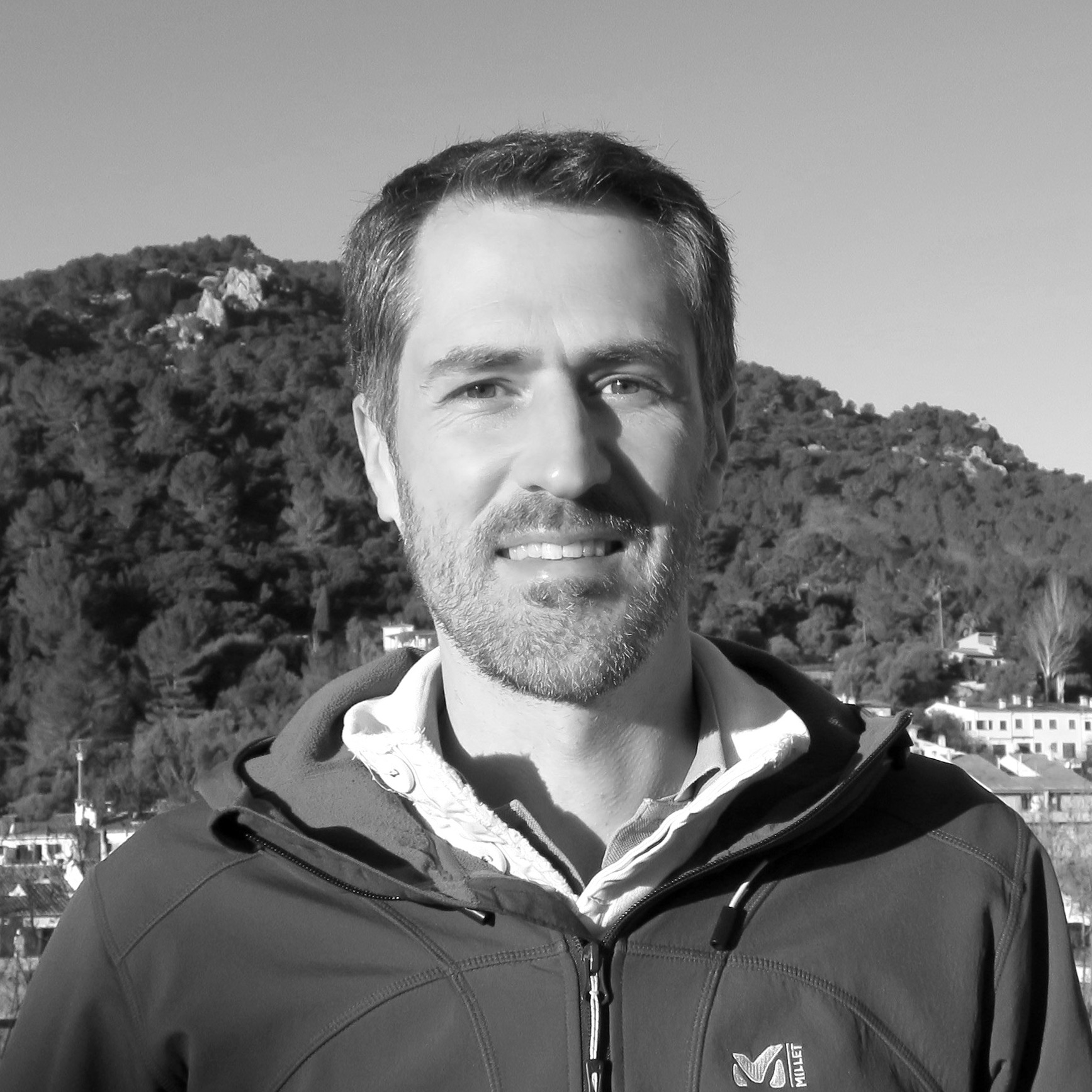 I am a Research Associate at Oregon State University, in the CEOAS department since 2010 after I spent a year collaborating with scientists from the Universidad de Concepcion (Chile). I got my Phd from Georgia Tech (Atlanta) in 2010 and an engineering degree in Hydraulics from the ENSEEIHT (France) in 2005. I am specialized in modeling realistic ocean flows in regional and coastal seas including the Gulf of Alaska, California Current, Peru Chile Current system, Patagonian shelf and Southeast Atlantic. I am particularly interested in the low frequency ocean variability, coastal and shelfbreak upwellings, eddy dynamics, transport of nutrient rich shelf water to the deep ocean and remote sensing. Recently, I have also been working on physical-biological interactions of the Southwest Atlantic, a project that aims to better understand and assess the sources of the limiting factor to phytoplankton growth: iron. For more information see my list of publications and C.V. 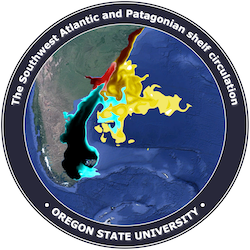 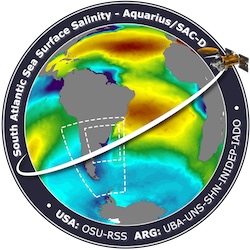 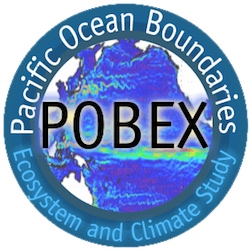 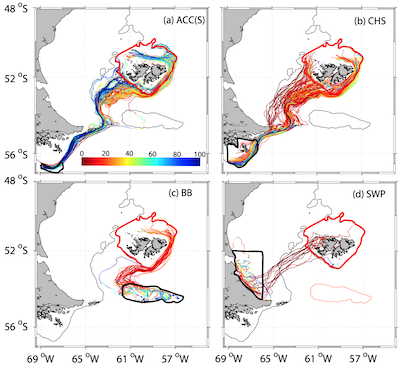 Abstract: The Malvinas Islands shelf (MIS) encompasses one of the most productive portions of the southwestern Atlantic. Large phytoplankton blooms, which constitute the base of the marine food web, emerge from the northern sector of the MIS and extend hundreds of kilometers northward along the Patagonian shelfbreak. The physical processes contributing to MIS fertilization are poorly understood. Here we use the results of a high-resolution ocean model to characterize circulation and water mass exchanges between the MIS and the Southern Ocean, as well as to identify the physical processes underlying fertilization of the shelf waters. Model results show that the shelf is characterized by an anticyclonic circulation pattern in the southwestern region that intensifies during summer and weakens during winter. The blocking effect of the islands leads to development of an upwind westward-flowing current in the northern portion of the MIS, recirculation cells in the western portion, and a northward throughflow in the narrow strait separating them. Particle tracking experiments reveal that the northern portion of the Drake Passage is the largest water mass source for the MIS. Passive tracers indicate that the place where the Antarctic Circumpolar Current collides with the MIS is the main shelfbreak obduction region. Subsequent development of tracer obduction is largely driven by the synergetic interaction of tides and wind forcing. After spreading along the southwestern shelfbreak, the concentration of tracer peaks in the winter and decays during the spring. In summer, the tracer accumulates on the lee of the islands in agreement with satellite images of chlorophyll-a concentration. Additional experiments show that there is an important contribution of MIS waters to the Patagonian shelfbreak front. 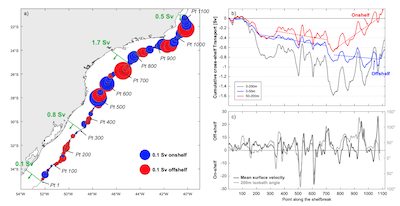 Abstract: A high-resolution ocean model is used to characterize the circulation and cross-shelf exchanges in the Brazilian/Uruguayan portion of the southwestern Atlantic shelf. Cross-shelf exchanges are strongly modulated by the bottom topography. There is ∼1.2 Sv of on-shelf transport between 21°S and 25.2°S, and ∼1.6 Sv of off-shelf transport between 35°S and 25.2°S. North of 25.2°S, the cross-shelf exchanges show a two-layer structure with an off-shelf flow in the upper 50m and on-shelf flow deep below. A Lagrangian diagnostic shows that ∼0.15 Sv of deep waters from the Brazil Current (z > 200 m) are injected into the shelf. Mixing with ambient waters produces a spicier (warmer and saltier) water mass, which is ejected into the open ocean in the southern region. Backward in-time particle's trajectories analysis reveals that 95% of the southward shelf transport at 32°S originates in the open ocean at 22°S. Our model diagnostics show that there is a very limited connectivity between the shelf regions north and south of Cabo Frio. Correlation analysis shows no significant influence of El Niño Southern Oscillation (ENSO) and Southern Annular Mode (SAM) on the time variability of the cross-shelf transport. Cross-shelf transports, however, are significantly correlated with the local wind stress variability. 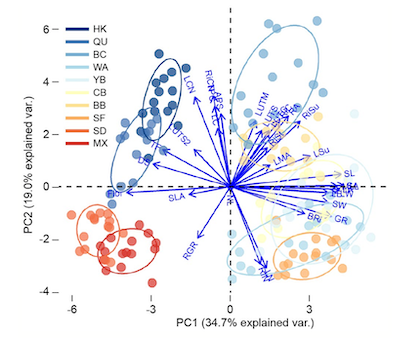 Abstract: Aim: Studies on latitudinal patterns in plant defence have traditionally overlooked the potential effect that resource availability may have in shaping plant defence. Likewise, latitudinal patterns of tolerance traits have rarely been studied, yet they can be a critical component of plant defence. Therefore, the aim of our study was to examine latitudinal variation in the production of tolerance and resistance traits against her- bivory along a latitudinal range and a natural gradient of resource availability from upwelling conditions. Location: Canada, North America and Mexico. Time period: Summer months of 2015. Major taxa used: The seagrass Zostera marina. Methods: We conducted experiments simulating macroherbivore (e.g., bird, fish) dam- age on the seagrass Z. marina at 10 sites across the Eastern Pacific coast (Canada– Mexico) and Quebec and analysed several traits related to resistance and tolerance strategies against herbivory. In addition, we examined the effects of potential sea- grass changes in defence strategies by performing a series of feeding experiments with mesoherbivores in a subset of sites. Results: We found that eelgrass resistance defences did not follow a linear latitudinal pattern but rather followed a bell-shaped curve which correlated with bottom-up control. In sites with higher nutrient availability, plants allocated resources to tol- erance strategies and had lower resistance traits. Furthermore, seagrasses did not respond linearly to increased herbivory pressure; while they tolerated moderate lev- els of herbivory, they underwent a significant reduction in tolerance and resistance under high herbivory levels, which also made them more susceptible to consumers in feeding experiments. Main conclusions: Our results highlight the importance that nutrient availability has in shaping latitudinal patterns of plant defence against herbivory and show how these defences may not respond linearly to increased herbivory pressure in seagrasses.